Varicose veins are common in dilated, tortuous, and elongated patients, particularly on the legs. Varicose veins, on the other hand, can be defined as any vein in the body that becomes twisted, stretched out, or loses elasticity.

The veins have a valve-like mechanism that allows blood to rise toward the heart. Leaflets cover the valves. When the flies lose their elasticity, the valves lose their ability to push blood upwards, resulting in back pressure and further vein elongation. As a result, the veins become twisted and hardened or ‘tortuous.’ As a result, the veins become visible as vascular tubes, particularly on the legs.

Varicose veins primarily affect the lower limbs, and the condition worsens when one stands for an extended period. People in the business of standing for long periods, such as salespeople, cops, plastic surgeons (who frequently stand for hours during surgery), and so on.

What is a varicose vein?

Varicose veins develop when your veins become enlarged, dilated, and overfilled with blood. As a result, varicose veins are swollen and raised, with a bluish-purple or red color. They are frequently excruciating.

Varicose Veins develop when veins do not function properly. One-way valves in veins prevent blood from flowing backward. When these valves fail, blood begins to pool in the veins instead of rushing toward the heart. The veins enlarge as a result. Varicose veins are commonly found in the legs. This is because the veins are furthest from your heart, and gravity makes blood flow difficult. 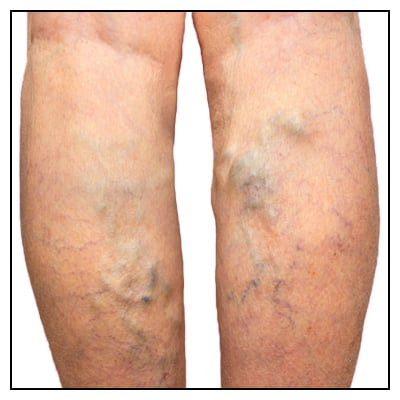 Various factors can cause varicose veins.

The blood volume in the body increases during pregnancy. This change benefits the growing baby but can also cause vein enlargement in the legs.

Women are more likely than men to develop the disease. Because female hormones tend to relax veins walls, hormonal changes before a menstrual period, during pregnancy, or menopause could be a factor. Birth control pills, for example, may increase the risk of varicose veins.

The valves in the vein that help control blood flow wear out with age. Because of this year, the valves eventually allow blood to flow back into the vein, where it collects.

Long periods of sitting or standing can cause blood to pool in the leg veins, increasing the pressure within the veins. The increased pressure can cause veins to stretch. This may weaken the vein walls and damage the valves.

Obesity strains your circulatory system because your vessels must work harder to deliver, distribute, and return blood to your heart due to the increased body mass. This can eventually result in the damage that causes varicose veins.

Regarding varicose veins, A venous ulcer is a painful sore near the ankles on the leg. Venous ulcers heal in stages. First, pressure builds up in the veins due to blood pooling. The increased pressure can cause the skin around the ankle to break and form an ulcer if not treated promptly. The varicose ulcer typically appears on the inner thigh skin, just above the ankle. Typically, the base of such an ulcer is red with irregular borders. The skin around the ulcer is discolored, dark, and complex. Swelling and heaviness in the leg, as well as foul-smelling discharge from the ulcers, itching, burning, and pain of varying intensity, may occur in the event of an infection.

Deep vein thrombosis (DVT) is the formation of a blood clot within a vein deep within the body (usually in the leg). As a result, the affected leg becomes swollen and warm. Other symptoms include leg pain and redness/discoloration of the skin on the leg. DVT can result in serious complications such as pulmonary embolism (when blood clots in vein break and travel via the bloodstream to lodge in the lungs). Pulmonary embolism symptoms include shortness of breath, chest pain, dizziness, rapid pulse, and blood spitting.

Another complication of varicose veins is varicose eczema (also known as stasis / gravitational eczema). It primarily affects the lower legs, causing the skin to become dry, red, itchy, scaly, and flaky. The affected skin has a shiny appearance and may be painful and tender. In addition, a brown discoloration of the skin may be present in some people.

Superficial thrombophlebitis is an inflammation of the vein near the skin’s surface caused by a blood clot. Intense swelling, redness, warmth, pain, and tenderness in the legs. A common symptom is vein hardening and darkening of the skin around the vein. In most cases, it is a short-term condition that resolves itself in about 2 – 3 weeks without complications. Cellulitis and DVT are rare complications that may occur in a minority of cases.

When painful varicose vein symptoms appear, they may include:

Spider veins are smaller in size than varicose veins. Spider veins near the skin’s surface are frequently red or blue.

Spider veins are most commonly found on the legs. They vary in size and structure and frequently resemble a spider’s web.

Unlike conventional treatments, homeopathy for varicose veins has no side effects. These varicose vein medicines are made of natural substances and are highly diluted yet potent, and they work to prevent blood backflow in the vein.

Homeopathy works to restore the body’s internal healing mechanism. This assists in treating the condition naturally and effectively and invasive procedures such as surgery can be avoided.

Though numerous treatment options are available in today’s modernised medical world, homoeopathy is a highly effective and natural method of treating varicose veins. The treatment in homeopathy begins with an understanding of the patient’s case history. There are over 100 homeopathy medicine for varicose veins. Arnica Montana, for example, can help relieve pain and swelling. Other medications, such as Hamamelis, are effective in treating varicose veins with bursting and tense feelings in the limbs and joints. In addition, the medicines fortify the walls of the affected veins. Other effective varicose vein treatments include Vipera, muxol, sulphur, tuberculinum, and pyrogen. Homeopathy’s natural remedies are also free of side effects. Homeopathy medicine for varicose veins does not include any painful or harmful surgical intervention, which has a positive outcome.

Bharat Homeopathy medicines work very well for mild to moderate cases of varicose veins. It helps reduce pain, control further varicosity, and reduce well; therefore, homeopathic treatment is strongly recommended for all patients with varicose veins except for those genuinely surgical. Natural substances that cause homeopathy medicines treat the diseases with zero side effects.