Psoriasis is an auto-immune disorder, characterized by red patches over the skin, causing an itching and burning sensation. It is caused due to inflammation in skin cells. Psoriasis is a non-contagious disorder, which means it does not spread with touch or physical contact.
At Bharat Homeopathy, our experts have experience in treating Psoriasis from roots with our Homeopathic medicines and their treatment plans.
Psoriasis can develop all over the body, but it appears mainly in the scalp, knee, elbows, and lower back. Psoriasis can be genetically transferred.
Avail Free Consultation
Call Now- +91 9958318261

Homeopathic Medicines do not suppress the immunity system, instead of enhancing it, which reverses the symptoms of psoriasis. It treats psoriasis from the root level and also prevents it from recurring. Homeopathic medicines do not include any immunosuppressive drug, steroid, and anti-inflammatory drugs, which tend to reduce the symptoms of psoriasis for a short period but do not provide a permanent solution from psoriasis. They further have negative effects on our vital organs like, kidney, liver, heart and joints. Homeopathic medicines are a lifesaver. Psoriasis is not just a skin disorder, but it also results from faulty functioning of the immune system and unhealthy lifestyle habits. Also, certain genetic predispositions make one prone to the disorder.

How Does Homeopathy Work

Allopathic medicines suppress symptoms of Psoriasis and provide temporary relief with long-term effects on the body. However, the prescription of allopathic treatment only includes immunosuppressant which harms person’s body and further damage the vital organs.

On the other hand, homeopathy promotes the inclusion of naturally driven therapies and herbal remedies to ease the symptoms and eradicate the cause of illness. This helps in treating the patient from within and secures a healthy and balanced life ahead. 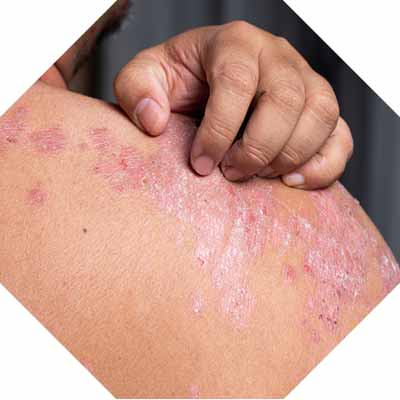 Psoriasis symptoms vary from person to person but the most common of them are:

Plaque Psoriasis: Plaque psoriasis or also called psoriasis Vulgaris, is said to be the most common psoriasis found. It appears as thick red patches on the skin, often with a silver or white scaly layer. The site of these patches are elbows, knees, lower back, and scalp. It is also considered as Autoimmune disease that causes new skin cells to grow in thick patches.

Guttate Psoriasis: Signs of guttate psoriasis include small, round, red spots caused by inflammation. Guttate psoriasis often appears on the arms, legs, and torso; however, it can affect any area of the body.

Erythrodermic Psoriasis: Erythrodermic psoriasis is rare, affecting about two percent of people living with psoriasis. This type of psoriasis can cause intense redness and shedding of skin layers in large sheets. It often affects nearly the whole body and can be life-threatening.

Scalp Psoriasis: Scalp psoriasis affects over 60 percent of people living with psoriasis. Scalp psoriasis can affect the hairline, the forehead, the back of the neck, and the skin in and around the ears.

HERE WE HAVE BHARAT HOMEOPATHY, A PERMANENT SOLUTION TO SKIN DISORDERS

Homeopathy has been offering cures to Skin Disorders from last many years. At Bharat Homeopathy our panel of experts has refined knowledge that makes skin treatment results more successful. We use natural and safe, and effective medicines that work on the root cause of Skin Disorders. We focus on the medical history of the patient and prepare a customized diet plan to cure Psoriasis.

Homeopathy is believed to be the first choice of the patients for the treatment of Skin Disorders. Homeopathy has the potential to stimulate the body’s natural healing capacity and restore the faulty immune system and cure psoriasis from root level. Homeopathy has a permanent cure for SKIN DISORDERS. It does not have any side effects as it is free from steroids. The treatment time varies from one person to person depending on their constitution, age, and genetic background. 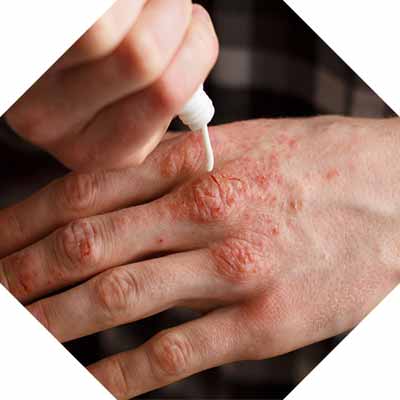 Are you ready to give yourself a better care?

We help you to get healthy and beautiful skin!

Our Homeopathic Psoriasis Treatment procedures have the least recovery time with long-term results.